The weather forecast was sunny and the boys were away so it was the perfect opportunity to tackle an outdoor project.  The garden was pretty overgrown because the garage was chock FULL and the lawnmower was buried somewhere, plus the weather hadn’t been conducive to gardening really.

I trimmed the tree in front of the summerhouse which was still in blossom, creating the perfect setting for the cute summerhouse (which I am quite enchanted with despite the spiders & rotten wood).

When I first moved into the house I didn’t really notice the summerhouse, because I was so excited about the potential of the main house.  The summerhouse was very cute but not in the best state of repair.  It was hidden behind a very overgrown tree and when you stood inside it you could barely see the house and garden.  The extensive baked on spider webs on the windows didn’t help either.  Plus it was so dinky it went to the back of my mind until the sun came out.  Whoever last stained the summerhouse did a shoddy job because the green paint was splattered all over the windows and no effort had been made to cut-in neatly.  It took me 4 hours to scrub and scrape the paint off the glass, but you can actually see through the windows now. 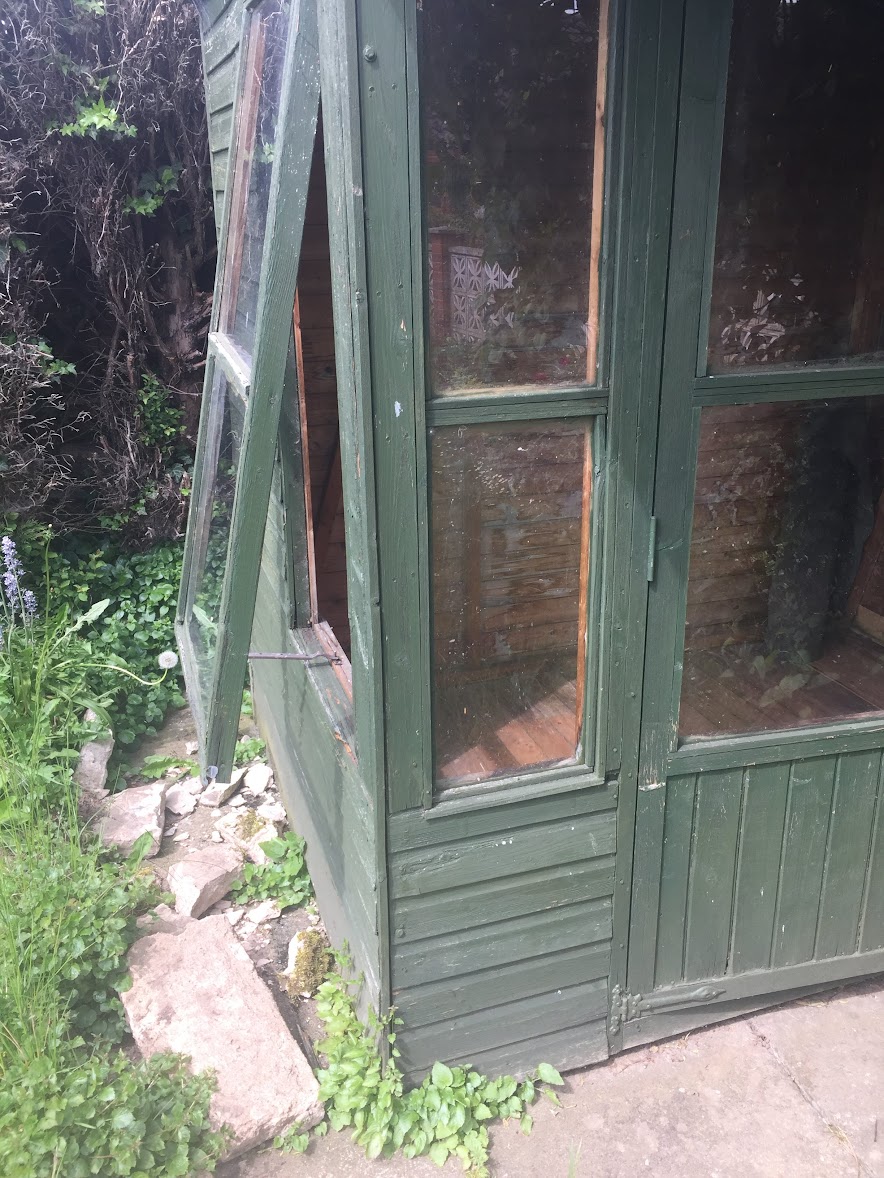 I was undecided whether to go for navy or green stain, but I decided the green blended in too well and I wanted the summerhouse to stand out a bit.  I was worried that lighter colours would be affected by the green underneath but it wasn’t a problem.  In the end I opted for a mid grey colour because I didn’t want it to absorb the heat and get too hot inside.  It’s surprisingly cool even on a hot day because you can open the side windows and double doors to let a breeze through.  De-spidering the place was the ‘first and scariest’ job because there were some big critters in there.  I vacuumed all the nooks and crannies before applying the grey paint which went on like a dream.  I intended to paint the ceiling but once the walls were painted I quite liked the wood contrast.

When the renovations are being completed on the house I might get the electrician to run electric to the summerhouse as I can see myself blogging in there on my laptop in the summer months.  For now an extension lead is doing the job though because listening to Spotify all day drains my little iPhone battery. 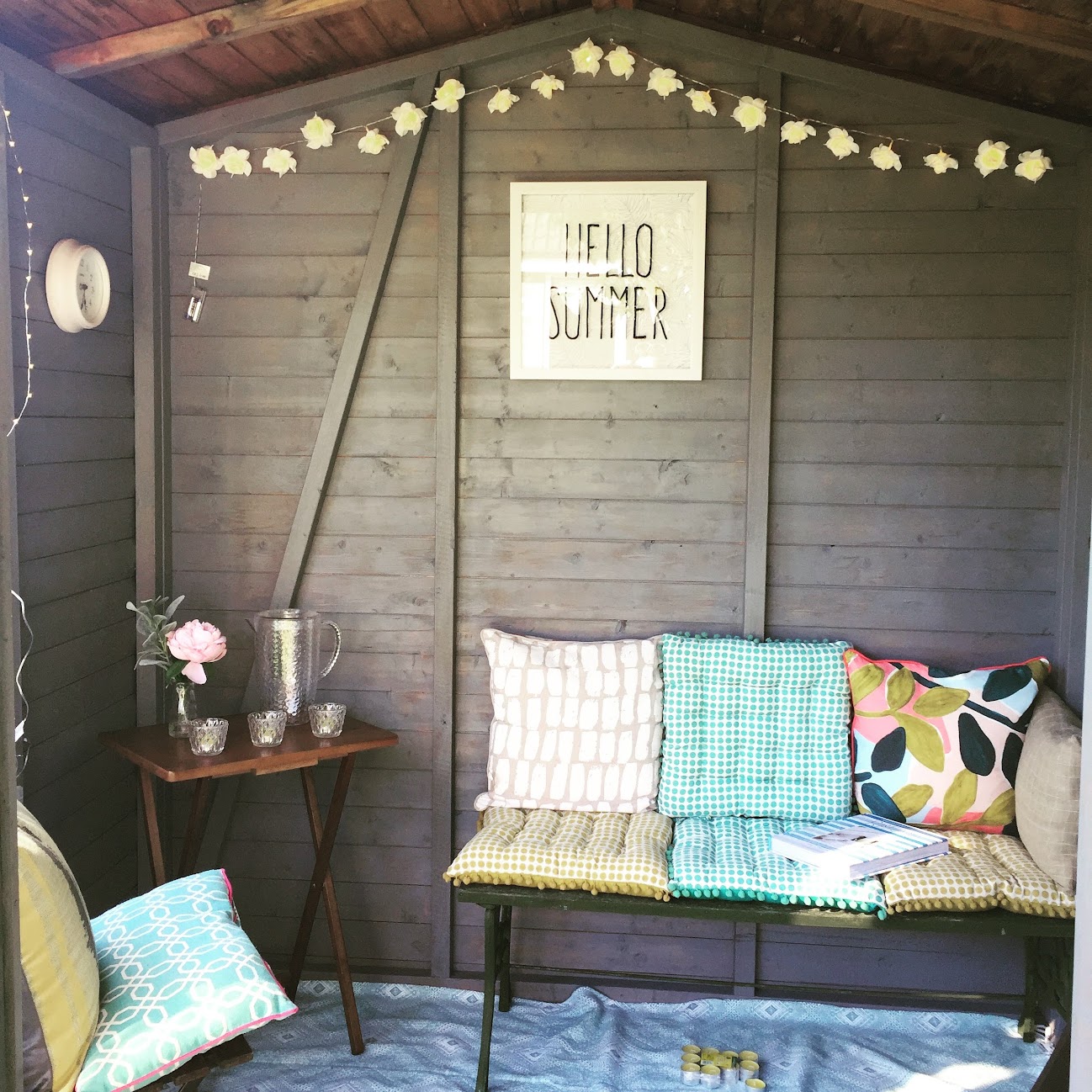 I have put some of the leftover roof felt under the blanket on the floor to protect it a little and create a more level floor.  I was going to buy a rug but a blanket is better because it was lighter on the budget and can go in the wash… 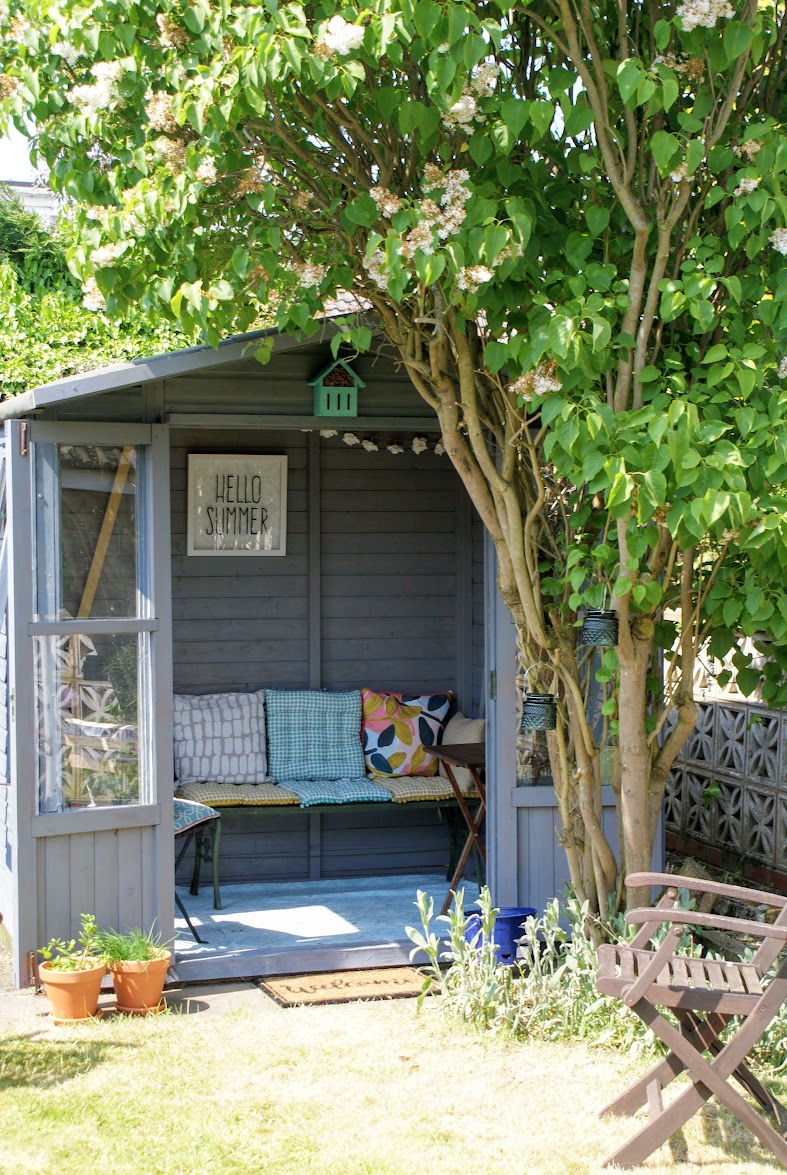 I finally braved the garage and found the lawnmower so the lawn looks tidy again.  In addition the edging and weeding mean the garden now looks inviting and ready for summer. 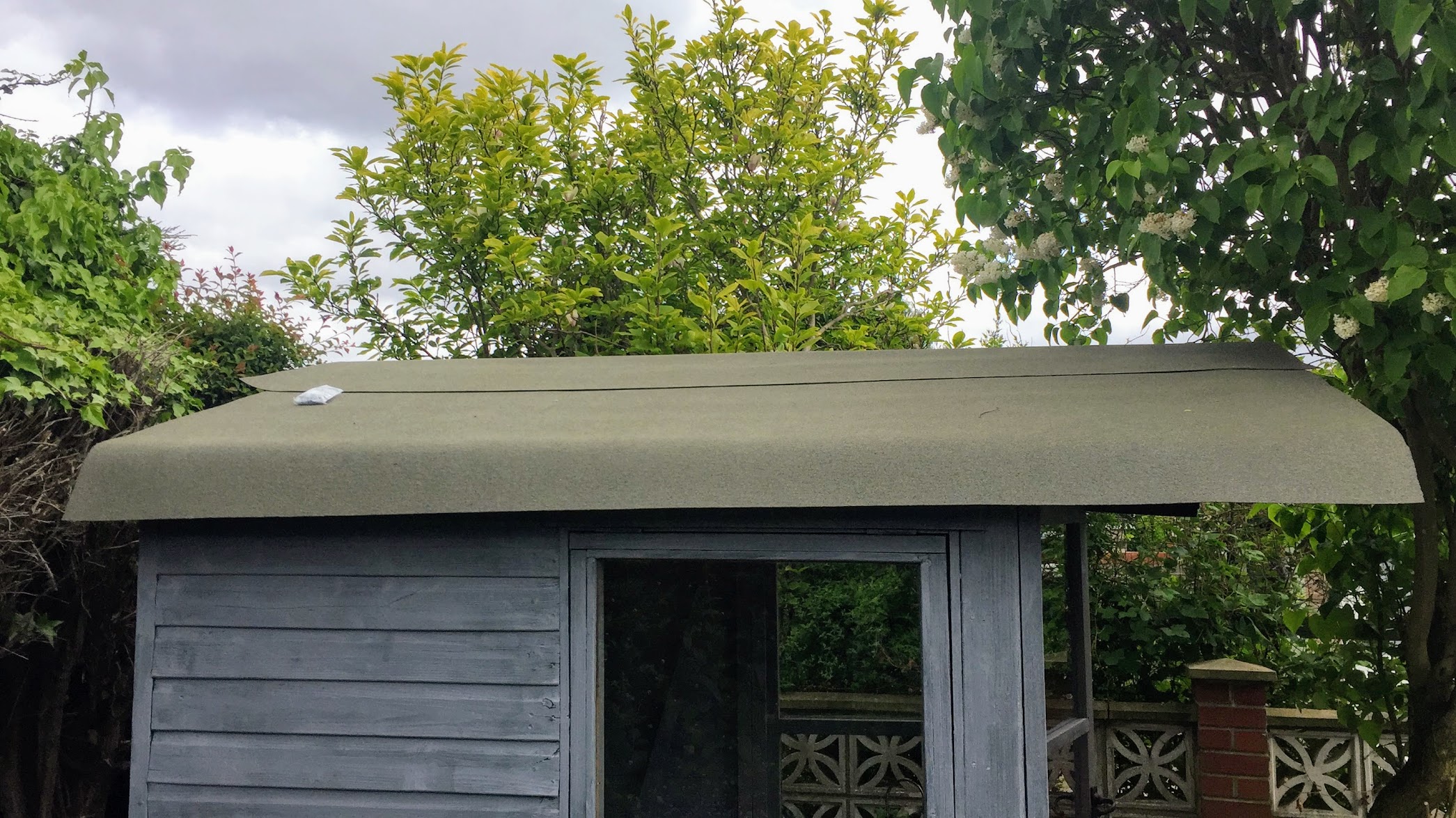 As I was painting the summerhouse it became clear some of the wood on the roof was rotten and would ideally need replacing.  I knew for sure the felt needed replacing as it had big holes in, but I thought just the two pieces of wood on either side were the only affected timber.  Once I took the two pieces of wood off and set about replacing them it became apparent I couldn’t nail the new beams into the existing support beams as they were rotten too.  Suddenly it became a bigger job, but I had gone past the point of no return so had to keep going.  Who knew getting nails in or out could be so challenging… 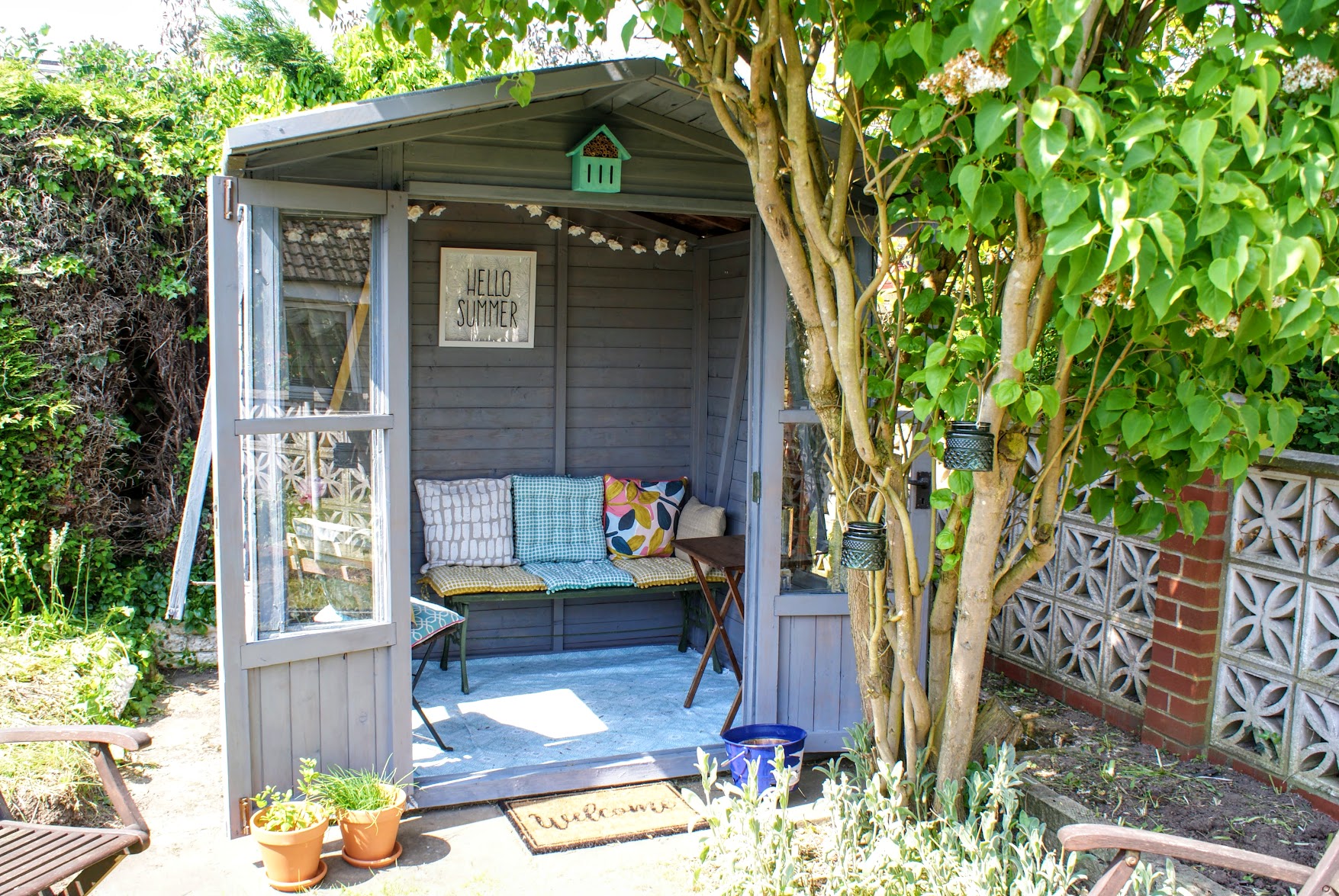 Terracotta pots, a welcoming mat and little barbecue finish the entrance way ready for a family barbecue this weekend.  Two green glass tealight holders twinkle in the lilac tree lighting the path to the summerhouse. 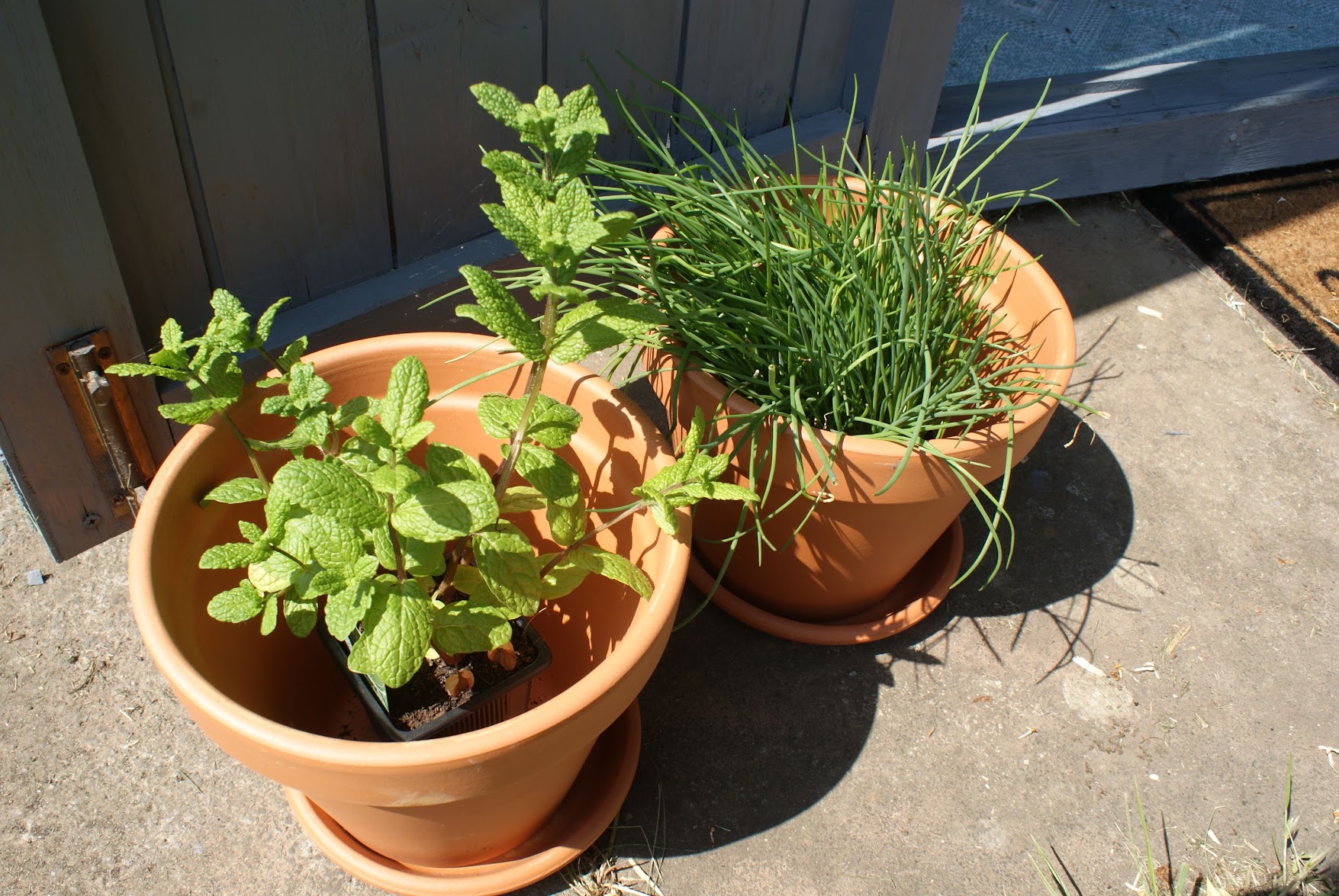 Mint for the gin & tonic… 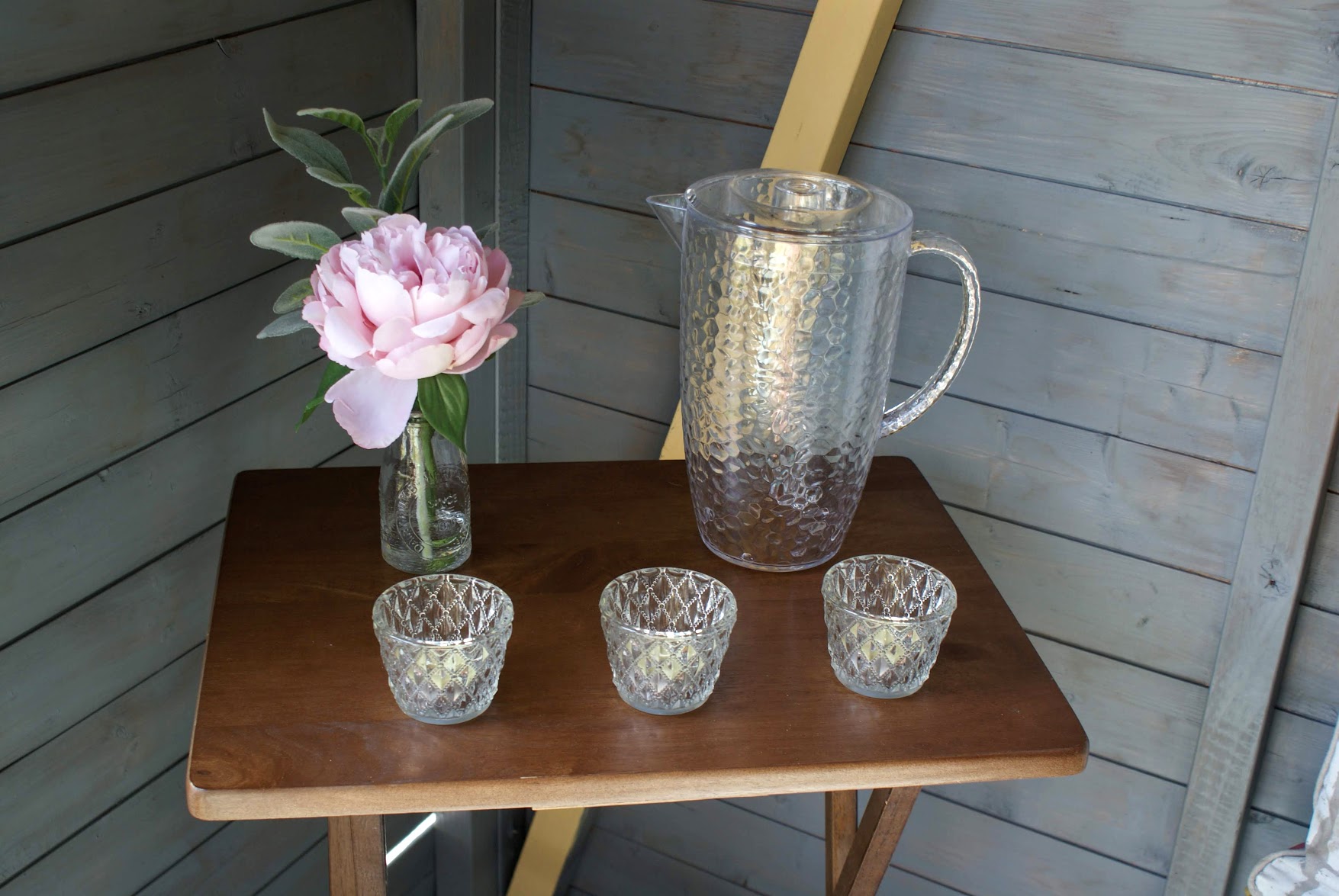 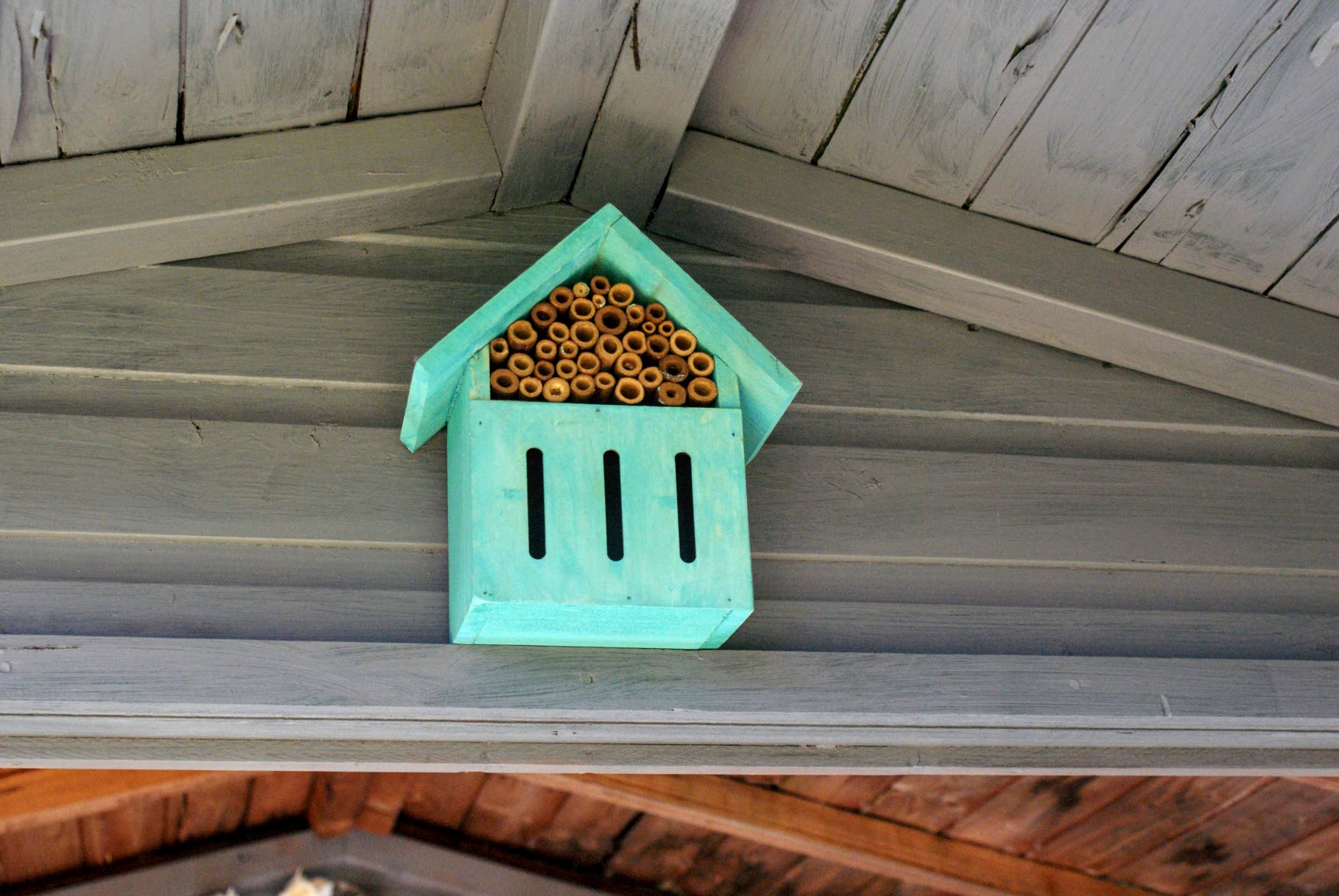 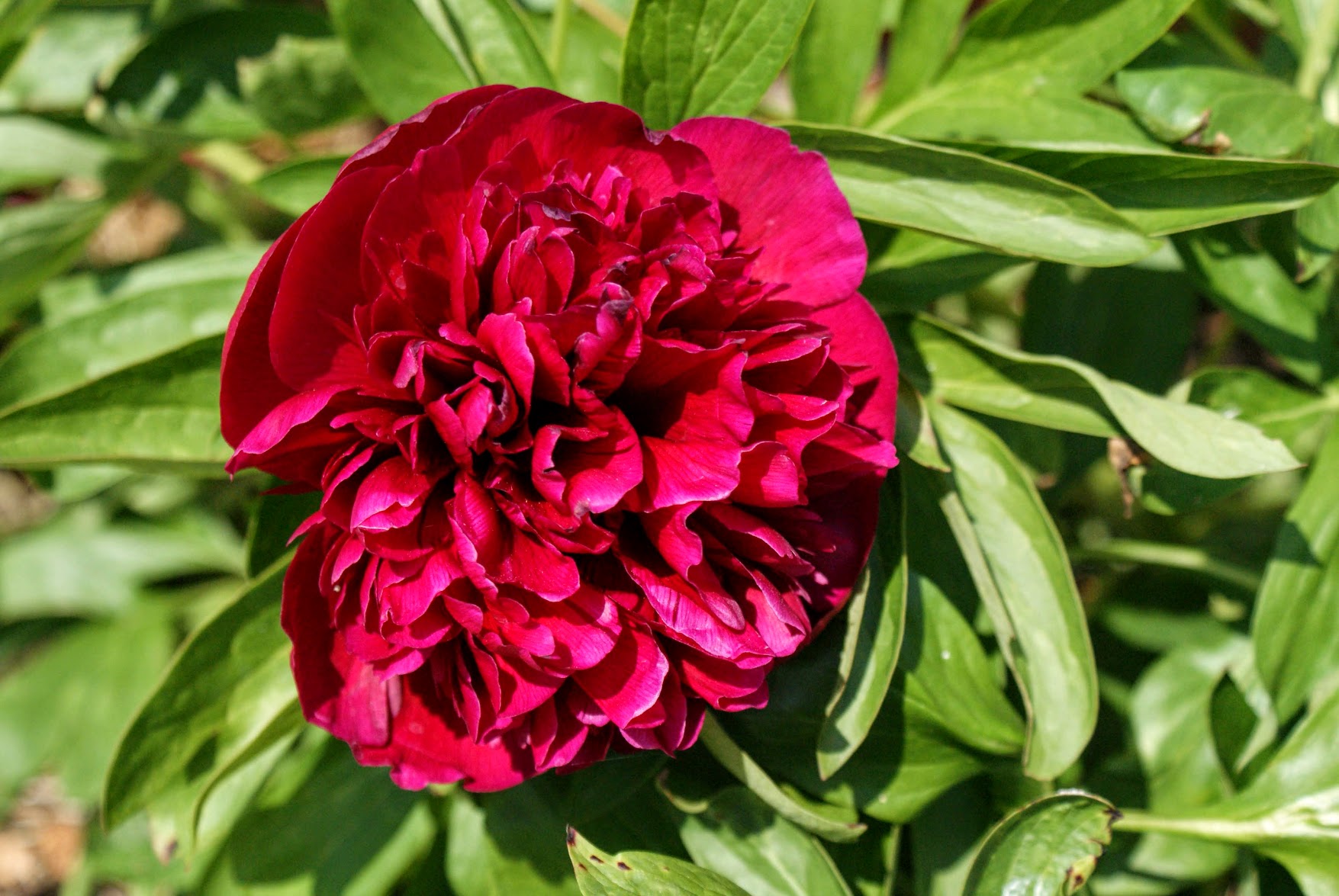 I inherited 3 dark pink peony plants which have been beautiful this spring.  I might get some pale pink peonies and alliums to mix in with them.

It’s a treat to have a garage for storing all the practical garden things in so we can keep this little space to enjoy.  I have decided to create a small patio next to the summerhouse for a table and chairs but digging is slow progress and I need to do a bit everyday until it’s time to lay bricks or slabs.  I might just dig a bit up and keep a partly raised bed for growing strawberries.  The summerhouse needs another coat of grey followed by a coat of exterior wood varnish, but then should be good for the rest of the summer.

The project has been a labour of love and I have enjoyed creating something personal and cute to modernise the garden.

What would you have in your summerhouse?

About the Author: Sarah Dewhirst

Sarah loves transforming things as she has a keen eye for aesthetic potential.